With separatists in Catalonia pushing for independence, Spain's democratic government is facing a constitutional crisis. Meanwhile, little progress has been made in negotiations on the terms of the United Kingdom's pending exit from the European Union.

Geopolitical tensions can affect economies and move financial markets. Here's a closer look at these two political standoffs taking center stage in Europe, either of which could influence national growth prospects as well as some international investments. 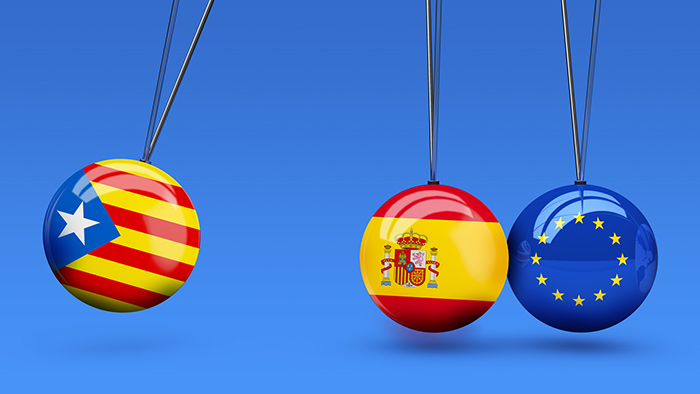 Catalonia is the northeastern region of Spain that includes Barcelona. It has its own language and cultural heritage. The region has 7.5 million residents, or about 16% of Spain's total population, and it accounts for nearly 20% of Spain's gross domestic product (GDP).1

The historical roots of this conflict are complex, and some divisions have existed for decades if not centuries. However, the current situation stems from a 2015 election that put separatist parties in control of Catalonia's regional parliament.2

Spain's 1978 constitution requires a nationwide election for any one of the 17 autonomous regions to gain full independence. On October 1, Catalonia held a unilateral referendum on independence, even though the nation's constitutional court had ruled it illegal. Violence broke out between police and voters, leading to public demonstrations.3

In an attempt to restore order, Prime Minister Mariano Rajoy invoked Article 155 of the Spanish Constitution, asking for emergency powers that were granted by the Senate. The Catalan government is being stripped of its autonomy, and certain agencies could be controlled by the central government in Madrid until new elections are held on December 21, 2017.4

Catalan leadership contends that the current tax structure is unfair and the region would be better off on its own. But EU officials have backed the Spanish position, and Catalonia seems to have the most to lose, at least in the short run.5 More than 1,100 companies have already started the process of moving their legal headquarters out of the troubled region.6

If political unrest escalates, tourists might avoid Spain and especially Barcelona, a popular destination that welcomed 8.4 million travelers last year. Tourism accounted for a significant slice (14%) of Spain's GDP in 2016.7

The crisis could even hamper a robust recovery in the EU's fourth largest economy. Spain's GDP expanded by 3.2% in each of the past two years and is expected to grow around 2.8% in 2017.8 However, the Spanish government has cut its forecast for 2018 GDP growth from 2.6% to 2.3%, citing the clash with Catalonia.9

The potential for more severe economic damage for Spain may depend on how punitive measures are carried out and the degree of resistance by Catalan leaders and citizens.

As the U.K. prepares to leave the EU, a weaker pound, rising inflation, and a slowdown in consumer spending have taken a toll on the U.K. economy. In the third quarter of 2017, U.K. GDP annual growth slowed to 1.5%, down from 1.8% in the first quarter.10

Brexit terms are not expected to be finalized until shortly before the deadline in March 2019, and the possibility of "no deal" or a "disorderly Brexit" is still a concern. In late October, Prime Minister Theresa May dashed hopes that a transitional trade pact (intended to help businesses plan for the two-year period beyond the exit date) will be forged early in 2018.11

EU on the Mend

A major concern surrounding both of these events is the possibility of contagion — that dissatisfied factions in other EU nations might be inspired to follow suit. But the region has made its way through a challenging decade with debt crises, high unemployment, and two economic downturns. In fact, the EU economy has been on a promising streak since mid-2013, with the pace of GDP growth picking up to 2.3% in the second quarter of 2017.12

If you own international investments, be prepared to hold tight during bouts of market volatility. It may be tempting to shift assets into or out of a region or nation based on the most recent headlines, but doing so could cause you to buy at high prices or sell at market lows, turning paper losses into permanent ones. You might review your portfolio periodically to help ensure that your asset allocation stays aligned with your risk tolerance and investment strategy over the long term.

Asset allocation and diversification are methods used to help manage investment risk; they do not guarantee a profit or protect against loss. All investments are subject to market fluctuation, risk, and loss of principal. When sold, investments may be worth more or less than their original cost. Investing in foreign securities carries additional risks, such as differences in financial reporting, currency exchange risk, as well as economic and political risk unique to the specific country, that may result in greater share price volatility. These risks should be carefully managed in light of your goals and risk tolerance.

This information is not intended as tax, legal, investment, or retirement advice or recommendations, and it may not be relied on for the purpose of avoiding any federal tax penalties. You are encouraged to seek advice from an independent professional advisor. The content is derived from sources believed to be accurate. Neither the information presented nor any opinion expressed constitutes a solicitation for the purchase or sale of any security. This material was written and prepared by Broadridge Advisor Solutions. © 2017 Broadridge Investor Communication Solutions, Inc.